With its 280.000 inhabitants, Ljubljana most certainly ranks among the smaller European capitals, but we are convinced that many bigger cities could be envious of all that it has, and many who would not. Ljubljana did not become a capital overnight, it prepared for this for centuries. When it was still "only" a provincial capital of Carniola, it became the capital for all Slovenians in 1918, when the Austro-Hungarian monarchy collapsed. A year later, in 1919, it acquired a university, in 1938 the Slovenian Academy of Sciences and Arts, a radio station as early as 1926 and TV in 1957. It had its own Philharmonic in 1701 and its opera exactly one hundred years ago, not to speak of its theaters. In short, if smallness is its only deficiency, let it be so, as long as it can!

Even a good thirty years ago the trade mark of Ljubljana was its skyscraper and castle. The castle, which is about a thousand years old, has been under reconstruction for quite a few years now, so that apart from seeing its renovated chapel of St. George, with its coats-of-arms, the pentagonal tower and wedding Hall, we most strongly recommend a visit to its high tower. The points is, there is a fantastic view from there (as you can see below), not only of the city (the rooftops of Old Ljubljana) and its surroundings (like the moody marsh Barje, the green park Tivoli) but also to the Kamnik Alps in the north and the Julian Alps with Triglav and the Karavanke Alps to the north-west. 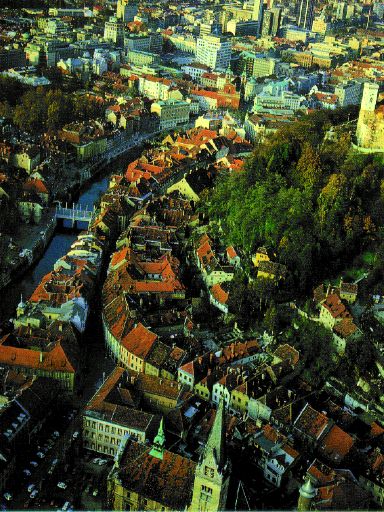 From the castle you descend into the old part of the city, the quarter between the castle hill and the river Ljubljanica. You won't need more than ten minutes to discover that Ljubljana is a city of the Baroque and also of the work of the architect Joze Plecnik. Actually, you would be unable to cross over the banks of the Ljubljanica river without him, as he had something to do with the Sustarski most (Cobblers' bridge), with Tromostovje (Three Bridges) and in the regulation of the Ljubljanica river itself, as well as at the market, and many other things, too. Among the Baroque monuments we should not only mention the churches (the cathedral, Franciscan, St. James's, the Holy Trinity, the theological seminary) but also the masterpieces of the Venetian sculptor Francesco Robba, the fountain of Carniolian rivers (1751) placed in the centre of Mestni Trg, in front of the Town Hall built in the Renaissance.

If you set off towards Krizanke, the seat of the Ljubljana Festival, you will pass by the City Museum, which is only one of the many in Ljubljana, as there is practically no field for which the capital would not have its own museum. Nor is there any lack of art galleries, and the Slovenians are most proud of their National Art gallery, where many works of Slovenian art through the centuries are on display, while we like most of all to show visitors our impressionists (Jakopic, Grohar, ...), not forgetting that our younger artists, whose works are stored in the Modern Art Gallery, also enjoy international acclaim. If you have time in the evening, do not miss the performances of the Opera or the concerts in the multi-purpose cultural centre of the Ivan Cankar Congress Centre (Cankarjev Dom).

See also: Mestna Obcina Ljubljana pages, and Ljubljana from A to Z, maintained by the Promocijski center Ljubljana,
the interactive map of the city centre,
or the full map of Ljubljana (236 kb).