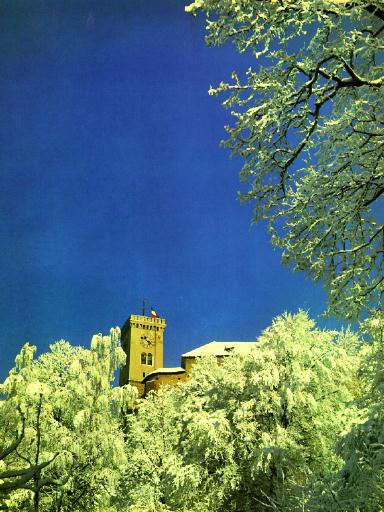 The Ljubljana Castle was built on a prehistoric site, on top of a hill. It was never explicity mentioned until medieval age. The castle was evidently administered by caretakers, but there isn't any proof that Ljubljana knights had their seat in the castle before 1144. In this year only Odalreich of Ljubljana is mentioned. In the Middle Ages the castle was used as a fortress and later it served various purposes, but the present quintagonal irregular layout of the castle is of later origin.

Inside the castle there is the Chapel of St. George, mentioned in 1489, redone later in Baroque style, and decorated in 1747 with the colorful coat-of-arms of Carniolian provincial governators. The tower of the chapel was renewed in 1990 and it's in Gothic style. In the chapel there is also one proof of domination of Emperor Frederick III of Habsburg. The main proof of Renaissance's time is the west wing with two large halls. Also the famous Piper's Tower was made at the same time (1544), but it was pulled down in 1812. In 1848 the architecture of the castle was changed when an addition was built to the western corner of the chapel.

In the 13th century the castle was the defence core of the town and protected the peasants until 1797, the year of the first French capture of the city.
In the 16th century the castle underwent some reconstruction works by Italian architects (Spati and Decius); in 1544 the provincial governator resided in it, a lot of residential areas were built and the defence system was renewed. In 1686 the gunpowder tower exploded and in 1782 another tower was struck, so the castle building became not functional until Joseph II had it altered in a prison house (although it already contained jails).

In 1849 the castle prison was abandoned until 1868, when it was used again as a prison house. In 1905 the goverment of Ljubljana intended to use it for cultural purposes: also flats were built in it. Ten years later a systematic reconstruction began which is still going on.